As it turned out, August was a fairly productive month.  I needed some instant gratification and turned my attention to two small projects in my UFO stash. 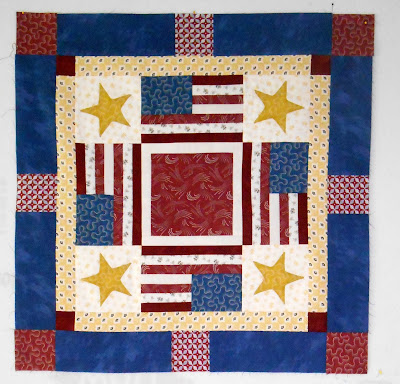 The first was this patriotic wall quilt.  This kit was given to me by a neighbor who was reducing the size of her stash. 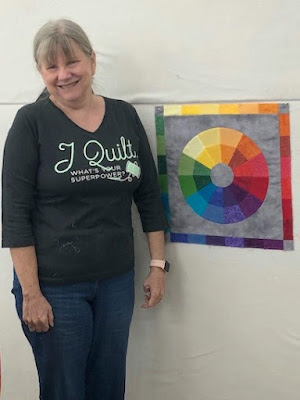 The second was a color wheel kit I had been wanting to make for more than a year.

As you can tell from the second picture, I was really tickled when it was taken.  Both these projects were done at a Guild retreat late in August.  I am relieved to report that 10 days after my return, neither my husband nor I show any signs of Covid.  We had been urged to isolate as much as possible the days leading up to the trip and to avoid any unnecessary side trips during the three-hour drive to get there.  All went well, and it was a wonderful time of working on projects, silliness, eating someone else’s cooking and generally enjoying good company with friends.

I knew this was risky behavior and was extremely fortunate. When I returned, I learned that a friend who attended a different retreat a few days before mine developed a breakthrough Covid infection.  She is recovering, but said there were several days where she felt absolutely miserable.  Five of the nine participants at that retreat were infected.  Apparently, one of the attendees had been exposed prior to the retreat, but thought she was okay since she didn’t feel sick.

Enjoy every moment of your life...

Life is too short to waste on grudges..

Laugh when you can,

Apologize when you should...

and let go of what you can't change..

Email ThisBlogThis!Share to TwitterShare to FacebookShare to Pinterest
Labels: Retreats

It’s been more than a month since I sat down at the keyboard to prepare a blog post.  I have no excuses, good or bad, but I have been working on my projects.  In fact, in the last month I have added three projects to the queue and completed one of them. 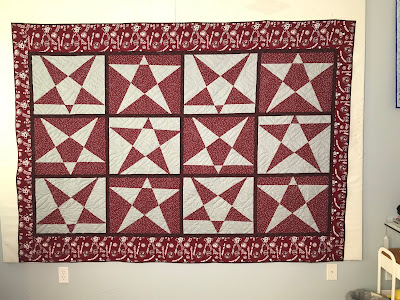 I’ll talk about the other two in later posts, but this quilt is the one that is bound, labeled, done.  It is most definitely out of my wheelhouse.  It’s big, chunky and wonky by design.  And most of all, it’s so Aggie!  Now, don’t get me wrong.  Although my blood runs Texas Longhorn burnt orange, I really like the Aggies…with the exception of one day a year and that depends on the final score.

Grandson Aidan is a freshman at Texas A&M and a member of the Corps.  Half way into this project, we learned that he could not use it in his dorm room.   He is required to use standard issue bed coverings in the Corps dorm.  In fact, we were told many of the young men in the Corps opt to use sleeping bags on the floor rather than having to make their beds military style every morning.  I also learned they are only allowed to have three things on their desks at any one time.  One of those is the computer he is required to have, so I guess that leaves a pen and piece of paper. 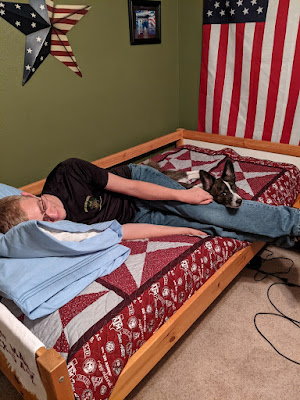 But, I digress.  Since I wanted him to have the quilt in time for his birthday, I had a friend quilt it for me, and it is now on his bed at home.  I’m told both he and his dog, Gus, approve.

I was so proud last week.  I had Esther’s Bloomers on the design wall ready to call it a finished top.  Well, you know what is said about pride going before a fall.  I had taken my picture… 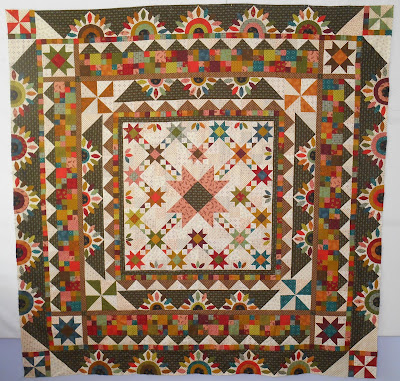 When I noticed something was not right with the border.  One side was not like the other three. 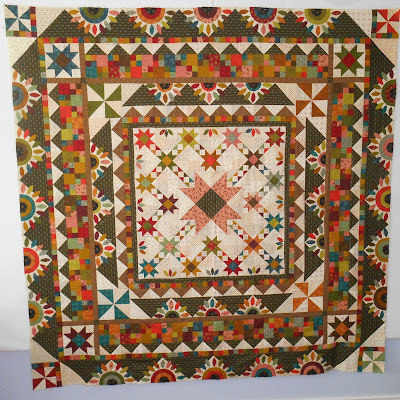 It took several days before I felt like I could trust myself with a seam ripper.

Falling down is part of life.  Getting back up is living – Jose N. Harris

The quilt I’m calling Covid Blues is finally a complete top.  The design is by Tara Lynn Baisden and appeared in the April 2019 issue of American Patchwork and Quilting.  I made my version rectangular instead of square and slightly smaller.  Now, it goes into the waiting to be quilted stage. 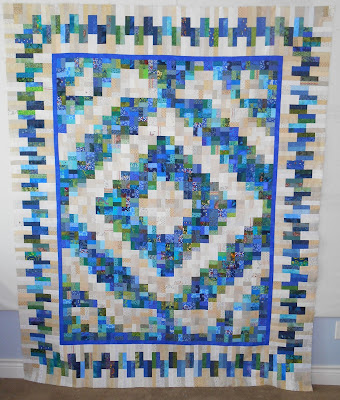 Since my last post, we made our first out-of-town trip.  We spent a week in Galveston to get some beach time.  We are not sea swimmers or sun bathers, which is good, since it rained every day but one.  No complaints, though.  Our unit had a covered balcony facing the shore and we were able to enjoy the salt air while we read.  Also, I am happy to report that there was NO rain in the quilt shop we visited.  Several friends had mentioned this store and it did not disappoint. 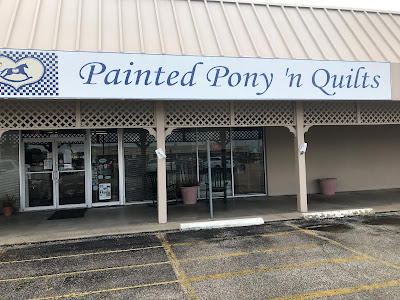 Here is my contribution to the local economy.  I haven't decided how I will use these fabrics. 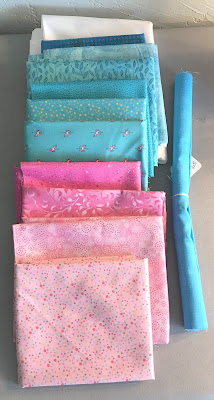 Our area is no longer in drought, the good news.  However, yards are still recovering from the extraordinarily harsh weather we had in February.  Many trees were lost, and some like this one on the golf course, are struggling to come back.  It looks like our own trees survived, but one is definitely not as healthy as in previous years. 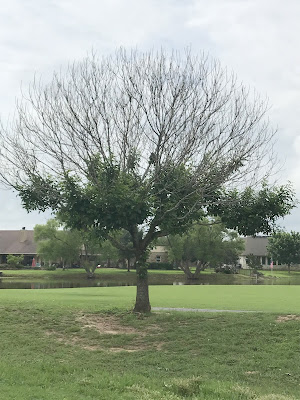 Our Guild will have its first regular meeting at the church since Covid next week.  I missed last month’s first in-person meeting in the park because of our trip.  It will be so good to see everyone again!

May you have the courage to change the patterns in your life that are no longer serving you. – Becoming Minimalist

It Was A Very Happy Mother's Day

Mother’s Day was particularly special this year.  Not only was I gifted a lavish bag of goodies, but Julia and youngest grandson, Aidan, spent several hours with us helping with household chores. 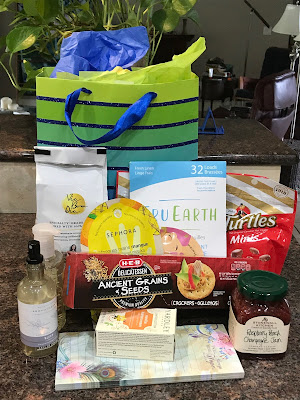 As a result, we now have an oven with working lights, new batteries in the smoke detectors, clean windows and … 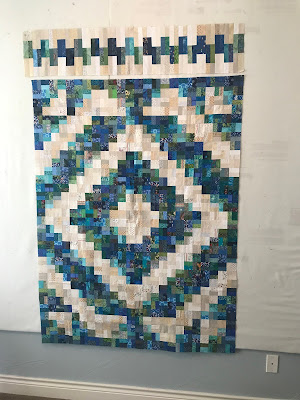 My design wall panels have finally been anchored to the wall of my sewing room.  I got the idea on how to go about mounting it from Vivian at Bronx Quilter.  The quilt on it is my Covid Blues quilt that got sidelined some months ago.  It’s time to make it a priority again.

Sometimes you have to give up on what you thought life would be like and learn to find the joy in the story you are actually living.  – Rachel Marie Martin 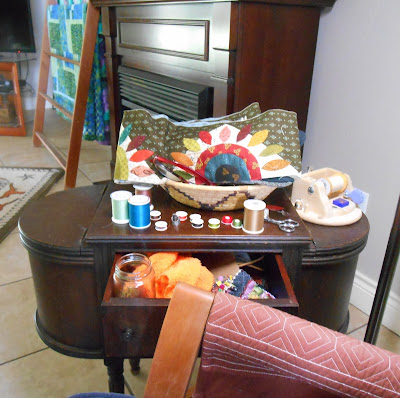 I delayed writing this post because just showing more petals being appliqued wasn’t very newsworthy, but it’s time to document that I am still working on Esther’s Bloomers and gradually making progress. 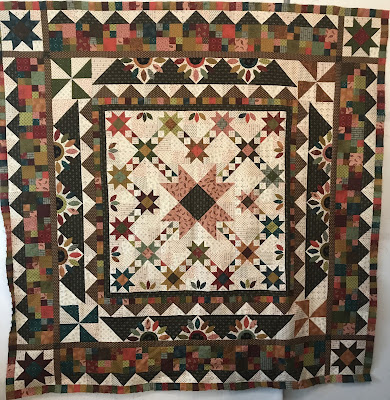 The center has grown, and two of the applique borders are ready to be attached. 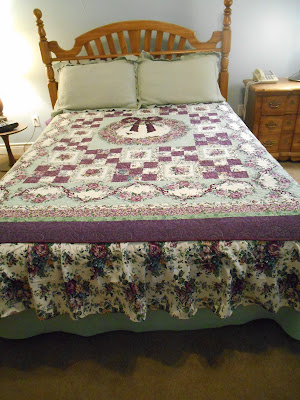 I had a small diversion when a neighbor asked me to hem a dust ruffle.  The quilt was made by an aunt, and the dust ruffle added by her daughter so it could serve as a bedspread.  I stitched the hem when we could see just how much fabric we had to work with. 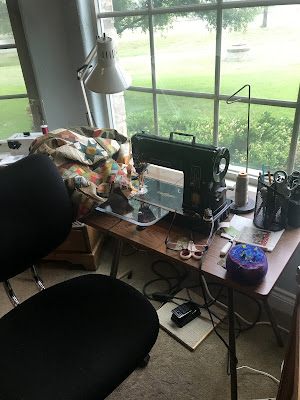 Our area is rated as being in moderate drought, so we were very happy when we had four inches of rain last weekend.   I love sitting at one of my vintage machines while it rains.

Now that hubby and I are fully vaccinated, life has loosened up just a bit.  We are still being cautious, but I have had a haircut (yippee) and we even joined our neighbors for a backyard barbeque Sunday night.

We choose our life every day.  We don’t necessarily choose our circumstances every day, but we do choose the person we are going to be. —Becoming Minimalist 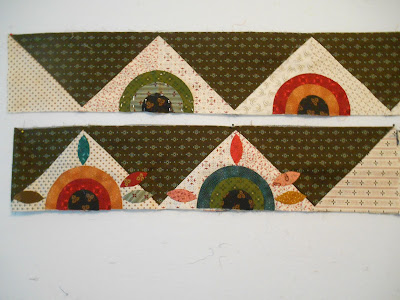 The sewing part of my week has mostly been consumed by trying to finish the applique on Esther’s Bloomers.  Progress is slow, but at least it is happening.  One more set of half circles needs to be stitched and petals are beginning to happen.

During those times when I just want a break from handwork, I’ve resumed making anti-ouch pouches for breast surgery patients.  I’ve let this project slip during the pandemic, but there will be a guild pick-up for finished pouches next week and I want to have something to contribute. 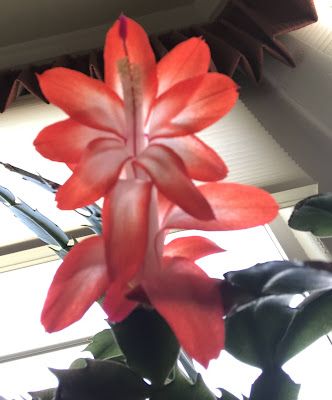 One of my Christmas cacti is making a show.  The blooms are always pointed downwards and I was curious to see how they look.  I turned on the selfie mode of my phone camera and even though the focus is bad, I think the result is interesting. 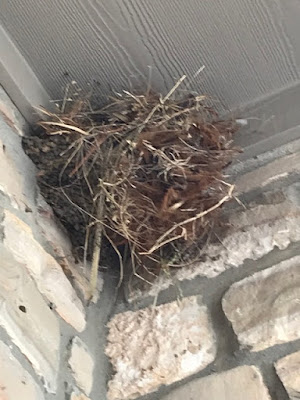 For three years this mud nest was built and occupied by swallows.  Some other kind of bird is using it this spring and they are adding lots of straw to the mud base.  I only thought it couldn’t get messier.

Life is from the inside out.  When you shift on the inside, life shits on the outside. – Kamal Ravikant

Mary
To my great joy my husband and I returned to the Texas Hill Country in 2006 following my retirement. I quickly rediscovered how much I love to quilt. Since then, with the support of a very patient husband and many quilting friends, I have been trying to make up for lost time. The purpose of this blog is to record my quilting journey and connect with others who love this craft.

Anti-Ouch Pouches are a small cushion that hang from the shoulder to protect the surgical site of patients who have undergone breast surgery. The story behind these cushions and instructions in pdf form for making them can be found at: https://www.asg.org/files/community_service/Anti_Ouch_Pouch.pdf