An Acquisition….and It’s Not Another Machine!

I don’t think I will ever be finished tweaking my sewing space.  This past week I finally did something I have been thinking about for quite some time.

I got rid of this clunky old television which I never watched and the base it was sitting on. 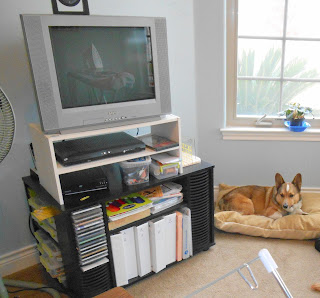 …and replaced it with this tool chest from a local  building supply store. I got the idea from exploring sewing room ideas online. 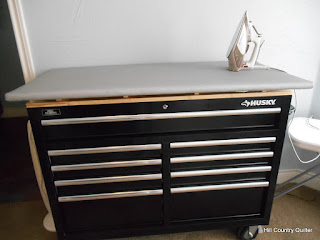 It’s not very pretty, but has several redeeming features:  It’s mobile, provides a lot of storage, and it’s large enough to hold my big ironing surface.  I’m still in the process of organizing it but have already moved my cutting dies to the large top drawer. I think it was a good change, especially since I prefer listening to audio books while sewing rather than having something on television. 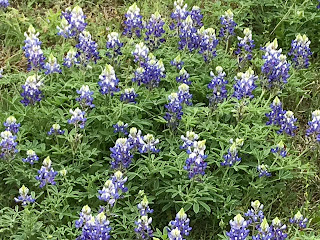 It doesn’t look like we’re going to have as prolific a year as some, but the wildflowers are beginning their show.  I love this time of year.
Posted by Mary at 1:04 PM 5 comments:

Selling a property; sorting through and discarding items held for decades; a trip to see family in South Texas. Life certainly can play havoc with planned activities. 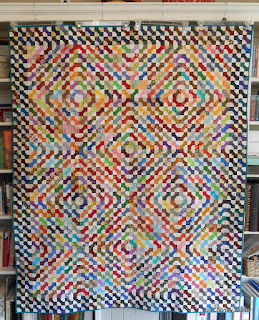 At long last, I can call this project finished.  I’ve named it “I Get By With A Little Help From My Friends” as it contains many gifted fabrics plus a few obtained dumpster diving at Guild retreats.  It measures approximately 54 X 66 inches and the bow tie blocks finish at 2 inches.  I think I began this project in January 2016. 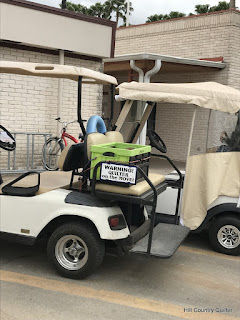 Our trip to South Texas to spend time with a Wisconsin relative who winters at a resort there was a lot of fun.  We arrived to a 102 degree temperature.  The next morning temps had dropped by 60+ degrees.  I kept hoping I would meet the driver of this golf cart, but never did.  We quilters are every where! 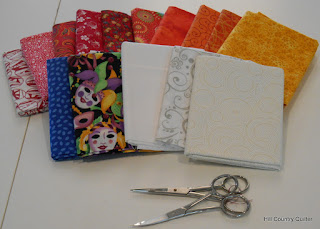 While there, however, I visited a huge flea market and came home with these treasures.
Posted by Mary at 9:05 AM 4 comments:

Mary
To my great joy my husband and I returned to the Texas Hill Country in 2006 following my retirement. I quickly rediscovered how much I love to quilt. Since then, with the support of a very patient husband and many quilting friends, I have been trying to make up for lost time. The purpose of this blog is to record my quilting journey and connect with others who love this craft.

Anti-Ouch Pouches are a small cushion that hang from the shoulder to protect the surgical site of patients who have undergone breast surgery. The story behind these cushions and instructions in pdf form for making them can be found at: https://www.asg.org/files/community_service/Anti_Ouch_Pouch.pdf